The Craft of Caring Project Video

My daughter got some pretend cooking pots and utensils for her birthday in September, but we didn't really think things through completely. Although I made her a sweet little apron to go with the cooking stuff, we didn't get any play food.

So, while it's good to see her using her imagination and making block soup, I thought Santa should perhaps come through with a few pieces of felt food in the Christmas stocking. 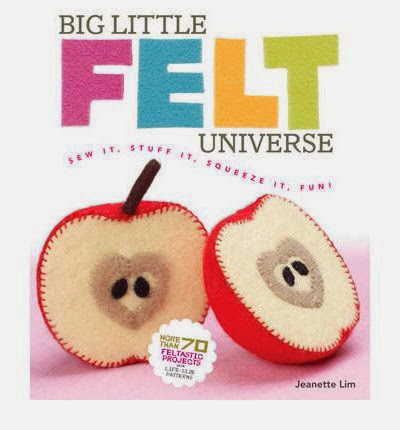 Santa's first stop, as usual, was the Stitch & Craft Library to grab Big Little Felt Universe, by Jeanette Lim. This book's photos and projects are adorably tempting, and the patterns are very clever. The banana fastens with magnets hidden in the stuffing, and the Velcro fastening the apple halves together hides in plain sight. 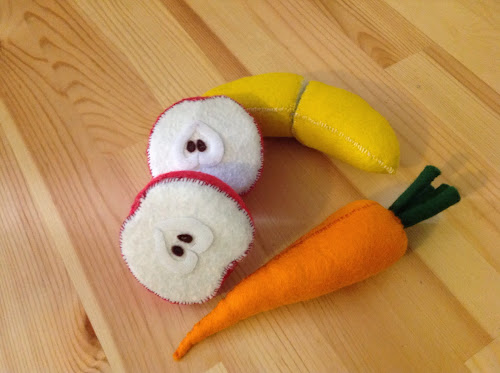 I also liked the breadth of the projects in the book, which are arranged into sections like cake, camping, fruit, and office. It would be possible to create a whole felt playscape from this book, and I think a lot of the patterns could be easily used to inspire patterns for anything not in the book.

I do think there could have been a little more detail in the instructions, both for stitching and stuffing. While helpful stitches are detailed in the book's introduction, the pattern instructions often simply say to stitch things together “as shown,” without specifying the stitch to be used. I didn't find it too difficult to figure out what stitch they meant (usually whip stitch, at least for the pieces I did), but since the thread is chosen to blend in well with the felt, it's not always easy to see the stitches in the photos.

It also would have been nice to have some indication of how full to make the pieces. The apple and banana, I think, came out over-stuffed.

I'm pretty pleased with how these came out, and I think my daughter will enjoy playing with them. I like the added confidence of knowing that I can fix these quickly and easily if she rips a seam. I do think the book is good, but a little more detail in the instructions would've made it great.

Anybody else doing any early Christmas making, or am I the lone crazy person who aims to have it all done by the end of November? (p.s. Don't forget that you can get a membership to the Stitch & Craft Library for 20% off, but only until the end of November!)

Lauren helps out with the Significant Seams blog, and asks that you not judge her by the quality of her hand-stitching.

Donate to support our work